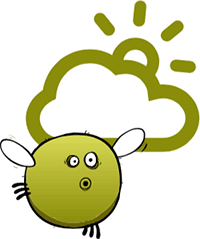 The 2016 Scottish midge season is just around the corner, but with fluctuating weather it’s still a waiting game. We would normally expect to see the first midges appearing in mid May, peaking during the first week of June, but we’ll have to see what the weather does over the next few weeks to see whether or not this pattern emerges.

In 2015, the season was delayed considerably due to the cool, wet and windy weather in May.  This is the most important time of the year to define the ‘midge season’ and last year this unpleasant weather had a knock-on effect on the total season’s catches. Our Midge Forecast trapping stations were significantly down compared with 2014, with our Argyll trapping station catching nearly 2.5 million midges less in 2015 than 2014, and the Gairloch station 1.5 million less.

We always see two generations (or ‘emergences’) of midges in Scotland during the summer time and although this occurred last year, the numbers never really recovered from the poor start to the season. The only ‘good’ thing for the midges was that the autumn of 2015 was mild, resulting in a small third generation which we were still catching in October.

The mild winter has maximised the overwintering survival of midge larvae, buried safely a few centimetres below the soil surface. All they need now is some cracking weather over the next few weeks to kick start 2016. They’re getting ready for midge season. Are you?