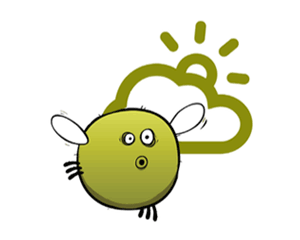 We’re right in the middle of the midge season just now; first generation females have laid several batches of eggs, which are developing through their larval stages in preparation for emergence at any time now.  The first half of the season has seen bumper midge numbers; probably the largest catches we have seen for some years.  The season started off with catches around 100,000 midges over a single night towards the end of May in our Argyll monitoring station, with this number increasing to over 400,00 per night for much of June.  Numbers have been a bit lower in the North-West of Scotland, with our Gairloch trap sitting at 1.7 million midges for the season to date.

With last night’s temperatures sitting at a cosy 14oC and wet weather moving into the west, we are expecting to see the second generation of midges to make their presence known later this week.  For the rest of the summer we will just have to wait and see; a significant second generation of midges is highly likely to lead to a mini third emergence in late August/September, particularly if we have an Indian Summer.  So, we could all be doing the ‘Midgie Fidget’ right into September if not prepared.

The Midge Forecast team have been busy attending various outdoor events during the first half of the season, including being one of the sponsors at the Fort William Mountain Bike World Cup with Smidge and having stands at the Game Fair and the recent Loch Lomond Highland games. The Midge Watch team have been busy as well, including making a TV appearance on STV News.  Midge Watch is a project that involves ‘Citizen Midge Scientists’ helping to track local variations in midge activity.  If you would like to get involved, you can contact the project at midgewatch@smidgeup.com