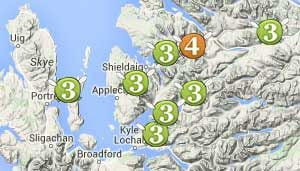 The 2019 midge season starting with a bang in the middle of May, a couple of weeks earlier than we would normally see. The first generation quickly peaked but the onset of the unusually cool, unsettled weather in June meant that we didn’t see the peak populations that we would see in a normal year. We would normally expect a second generation of midges to emerge around 6 weeks after the first and we have recently seen increases in midge reports from various Smidge fans on our Facebook page. This second generation is normally quite a lot smaller than the first but with the unusual weather patterns this year, this may not be the case.

Looking at some weather data we gathered – The warmer temperature this year compared with last can be used to explain the first emergence this year being around 2 weeks earlier than last year. Temperature also seems to be more important in June – numbers have been high but not the peak we would expect at that time of the year – this may be because the May midges mated early & the second generation hasn’t yet emerged (should be about now as it takes 6 weeks for larvae to develop). Sadly, this means you can expect bumper numbers of midges coming in the next few weeks – best Smidge Up!